The bindsnet.network.Network object is BindsNET’s main offering. It is responsible for the coordination of simulation of all its constituent components: neurons, synapses, learning rules, etc. To create one:

The dt argument specifies the simulation time step, which determines what temporal granularity, in milliseconds, simulations are solved at. All simulation is done with the Euler method for the sake of computational simplicity. If instability is encountered in your simulation, use a smaller dt to resolve numerical instability.

The batch_size argument specifies the expected minibatch size of the input data. However, since BindsNET supports dynamics minibatch size, this argument can safely be ignored. It is used to initialize stateful neuronal and synaptic variables, and may provide a small speedup if specified beforehand.

The reward_fn argument takes in class that specifies how a scalar reward signal will be computed and fed to the network and its components. Typically, the output of this callable class will be used in certain “reward-modulated”, or “three-factor” learning rules. See `Using Learning Rules`_ for more details.

BindsNET supports three categories of network component: layers of neurons (nodes), connections between them (bindsnet.network.topology), and monitors for recording the evolution of state variables (bindsnet.network.monitors).

Names of components in a network are arbitrary, and need only be unique within their component group (layers, connections, and monitors) in order to address them uniquely. We encourage our users to develop their own naming conventions, using whatever works best for them.

To create a layer (or population) of nodes (in this case, leaky integrate-and-fire (LIF) neurons:

To add a layer to the network, use the add_layer function, and give it a name (a string) to call it by:

Such layers are kept in the dictionary attribute network.layers, and can be accessed by the user; e.g., by network.layers['LIF population'].

Custom nodes objects can be implemented by sub-classing bindsnet.network.nodes.Nodes, an abstract class with common logic for neuron simulation. The functions forward(self, x: torch.Tensor) (computes effects of input data on neuron population; e.g., voltage changes, spike occurrences, etc.), reset_state_variables(self) (resets neuron state variables to default values), and _compute_decays(self) must be implemented, as they are included as abstract functions of bindsnet.network.nodes.Nodes.

Connections can be added between different populations of neurons (a projection), or from a population back to itself (a recurrent connection). To create an all-to-all connection:

Like nodes, each connection object has many keyword arguments, but both source and target are required. These must be objects that subclass bindsnet.network.nodes.Nodes. Other arguments include w and b (weight and bias tensors for the connection), wmin and wmax (minimum and maximum allowable weight values), update_rule (bindsnet.learning.LearningRule; used for updating connection weights based on pre- and post-synaptic neuron activity and / or global neuromodulatory signals), and norm (a floating point value to normalize weights by).

Custom connection objects can be implemented by sub-classing bindsnet.network.topology.AbstractConnection, an abstract class with common logic for computing synapse outputs and updates. This includes functions compute (for computing input to downstream layer as a function of spikes and connection weights), update (for updating connection weights based on pre-, post-synaptic activity and possibly other signals; e.g., reward prediction error), normalize (for ensuring weights incident to post-synaptic neurons sum to a pre-specified value), and reset_state_variables (for re-initializing stateful variables for the start of a new simulation).

bindsnet.network.monitors.AbstractMonitor objects can be used to record tensor-valued variables over the course of simulation in certain network components. To create a monitor to monitor a single component:

The user must specify a Nodes or AbstractConnection object from which to record, attributes of that object to record (state_vars), and, optionally, how many time steps the simulation(s) will last, in order to save time by pre-allocating memory.

To add a monitor to the network (thereby enabling monitoring), use the add_monitor function of the bindsnet.network.Network class:

The name given to the monitor is not important. It is simply used by the user to select from the monitor objects controlled by a Network instance.

One can get the contents of a monitor by calling network.monitors[<name>].get(<state_var>), where <state_var> is a member of the iterable passed in for the state_vars argument. This returns a tensor of shape (time, n_1, ..., n_k), where (n_1, ..., n_k) is the shape of the recorded state variable.

The bindsnet.network.monitors.NetworkMonitor is used to record from many network components at once. To create one:

Similarly, one can get the contents of a network monitor by calling network.monitors[<name>].get(). Note this function takes no arguments; it returns a dictionary mapping network components to a sub-dictionary mapping state variables to their tensor-valued recording.

After building up a Network object, the next step is to run a simulation. Here, the function Network.run comes into play. It takes arguments inputs (a dictionary mapping names of layers subclassing AbstractInput to input data of shape [time, batch_size, *input_shape], where input_shape is the shape of the neuron population to which the data is passed), time (the number of simulation timesteps, generally thought of as milliseconds), and a number of keyword arguments, including clamp (and unclamp), used to force neurons to spike (or not spike) at any given time step, reward, for supplying to reward-modulated learning rules, and masks, a dictionary mapping connections to boolean tensors specifying which synapses weights to clamp to zero.

Building on the previous parts of this guide, we present a simple end-to-end example of simulating a two-layer, input-output spiking neural network.

This script will result in figures that looks something like this: 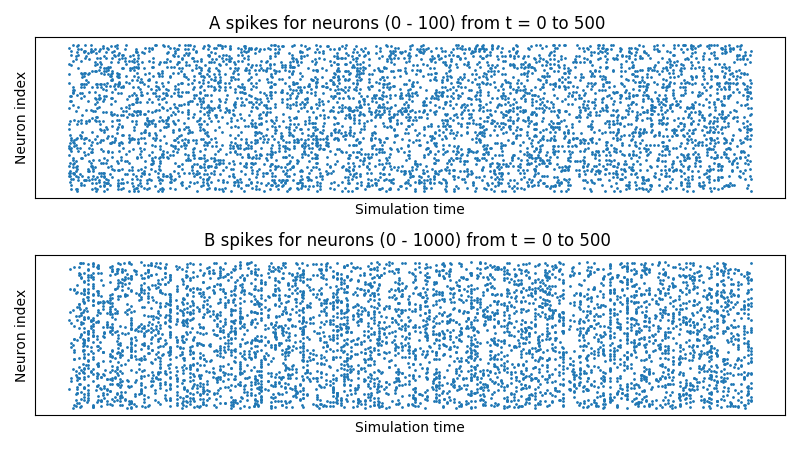 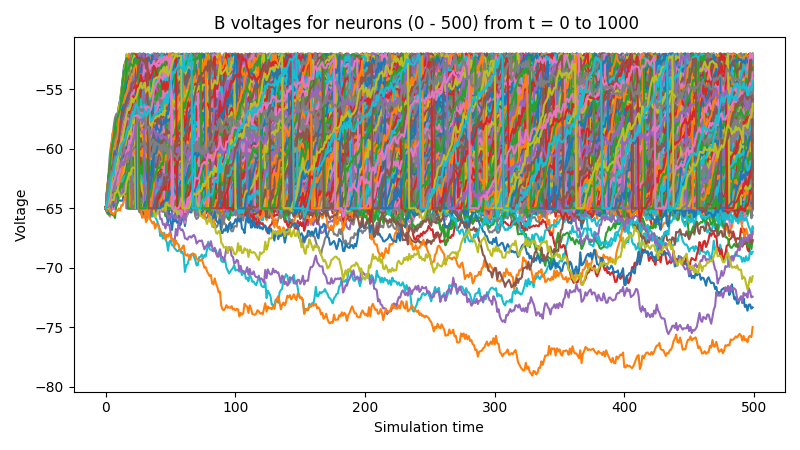 Notice that, in the voltages plot, no voltage goes above -52mV, the default threshold of the LIFNodes object. After hitting this point, neurons’ voltage is reset to -64mV, which can also be seen in the figure.

The simulation of all network components is synchronous (clock-driven); i.e., all components are updated at each time step. Other frameworks use event-driven simulation, where spikes can occur at arbitrary times instead of at regular multiples of dt. We chose clock-driven simulation due to ease of implementation and for computational efficiency considerations.

During a simulation step, input to each layer is computed as the sum of all outputs from layers connecting to it (weighted by synapse weights) from the previous simulation time step (implemented by the _get_inputs method of the bindsnet.network.Network class). This model allows us to decouple network components and perform their simulation separately at the temporal granularity of chosen dt, interacting only between simulation steps.

This is a strict departure from the computation of deep neural networks (DNNs), in which an ordering of layers is supposed, and layers’ activations are computed in sequence from the shallowest to the deepest layer in a single time step, with the exclusion of recurrent layers, whose computations are still ordered in time.